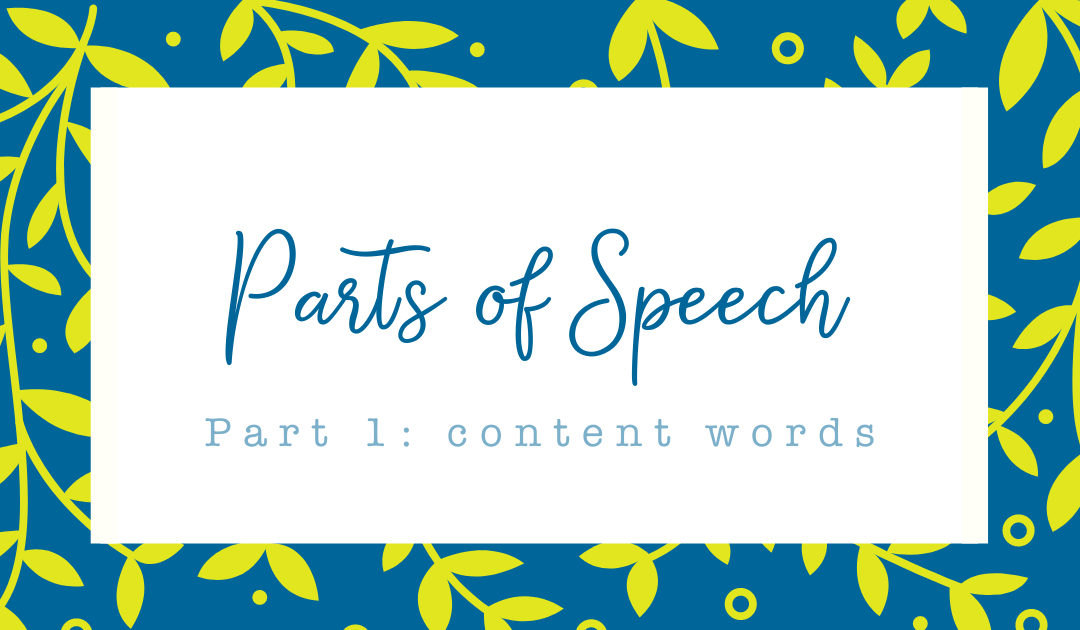 Parts of speech are the types of words that make up sentences. Every sentence we write or speak has these parts, also called word classes. Each part of speech or word class performs a specific function in a sentence or phrase. You’ve probably heard of the 4 heavy-lifters:

But you may be surprised to learn that this only covers about half the parts of speech. Most grammar reference books define 9 parts of speech. The other 5 are pronouns, determiners, conjunctions, prepositions and interjections.

In this first of 2 blog posts on parts of speech, I’ll focus on nouns, verbs, adjectives and adverbs. These are known as lexical or content words and form the central subject matter in dictionaries. In sentences, these words contribute content-related meaning.

It’s important to note that the same word can fit into different categories, depending on its function in a sentence. So a word might be a verb in one sentence, a noun in another and an adjective or adverb in yet another. I’ll give an example of that later.

First, let’s examine nouns, verbs, adjectives and adverbs in turn. In doing so, I’ll refer to the following sentence, which includes at least one of each part of speech:

Hey, that cute little koala climbed quickly up her tall tree and munched hungrily on some gum leaves.

OK, I’m not trying to win any literary prizes with this sentence. It’s a bit artificial because most sentences only contain some of the different parts of speech, not all of them. A sentence can be grammatically complete with just a noun and a verb (e.g. Dolphins swim). In fact, an imperative sentence – one that expresses a request or command – can consist of a single word (e.g. Sit!).

But back to our sample sentence about the cute little koala, starting with the nouns.

Nouns are words that name people, animals, places, things and abstract concepts. In our sample sentence, the nouns are koala, tree and leaves, which are all common nouns because they name generic types or classes of things rather than specific things.

Proper nouns are the names of specific people, places and entities and are usually written with initial capital letters (e.g. Vice President Kamala Harris, Uluru, Twitter). Collective nouns name groups of things, such as a family, an audience or a jury.

Nouns can also be classified as concrete or abstract. Concrete nouns name tangible things: you can see, hear, smell, taste or touch them. These types of nouns are usually easy to identify in a sentence. Abstract nouns name intangible things (things you can’t detect with the 5 senses) like emotions, ideas and qualities (e.g. joy, wisdom, determination, justice). These types of nouns can be harder to spot in a sentence.

TIP: If it makes sense to put an article (like the or a) in front of a word, it is most likely a noun.

Beware of long strings of nouns in your writing, which make the writing dull, dense and difficult to read. Noun strings can often be rendered more easily understood by adding prepositions and converting one or more of the nouns to verb forms of the same word. Here’s an example of what I mean:

Rewrite: I found a handy online tool for calculating loan repayments. [3 nouns separated by a preposition and one noun converted to a verb form].

Speaking of verbs, let’s take a closer look at this vital part of speech in the next section.

Verbs are arguably the most important of the 9 parts of speech and can be viewed as the ‘heart-throb’ of a sentence. They describe the subject’s state of being (the verb to be) or express actions or processes. To be grammatically complete, a sentence must have a verb.

In our sample sentence, climbed and munched are the verbs, and they are in the past tense. Verbs can be finite (meaning they belong to a subject and show tense) or non-finite (infinitives, participles and gerunds).

If you’ve ever learned another language, you’ve probably heard the expression ‘to conjugate a verb’. This means the way verbs change from their base form to communicate person (first, second or third), number (singular or plural) and tense (past, present or future). For example, the verb to be in the singular present tense can be am, are or is depending on whether you are writing in the first person (I am), second person (you are) or third person (she/he/it is).

Verbs are probably the most complex of the 9 parts of speech, and there’s a lot more that could be covered than is possible in this brief overview.

TIP: To improve your writing, hunt for strong verbs that energise your sentences.

The next 2 classes of content words we’ll look at in this post, adjectives and adverbs, are called modifiers because they can be used to modify nouns or verbs (and other parts of speech) by providing extra information about them.

The adjectives in our sample sentence are cute, little, tall and gum. These words evaluate (cute), describe (little, tall) or define (gum) an adjacent noun or pronoun.

An interesting feature of our language is that strings of 2 or more adjectives modifying the same noun usually follow a certain order. Evaluative adjectives (those expressing an opinion or observation) come first. Descriptive adjectives (those describing physical attributes like size, shape, age or colour) come next. And definitive or qualifying adjectives (those defining the origin, material or purpose of the noun) come last, directly before the noun. This is called the royal order of adjectives. Native English speakers seem to know this order instinctively, but it can be tricky for non-native speakers.

Although adjectives add colour and interest to your writing, experts recommend restraint in their use. In fact, Mark Twain once wrote, ‘When you catch an adjective, kill it. … They weaken when they are close together. They give strength when they are far apart.’ If you use an adjective, make sure it precisely conveys the image you want your reader to see. Or, consider using a stronger noun instead of an adjective + noun combination. For example, instead of a difficult situation, how about a dilemma, predicament or quandary?

For a summary and more information, download my quick grammar guide to adjectives.

The placement of adverbs in a sentence is important; their position can completely alter the meaning of a sentence. For example, compare the different meanings of these 2 sentences:

Jackie nearly lost all her money.

Jackie lost nearly all her money.

As with adjectives, overuse of adverbs can weaken writing, so use them judiciously. Every time you spot an adverb modifying a verb, for example, consider whether a stronger verb would perform a better job in the sentence. In our sample sentence, climbed quickly could be replaced with scrambled, and munched hungrily could be replaced with devoured.

Another way to trim and tighten your writing is to delete superfluous adverbs like actually, really, very, absolutely, usually, quite and so on.

And as with adjectives, there’s also a royal order of adverbs, which specifies that strings of adverbs or adverbial phrases in a sentence should follow a certain order: manner, place, frequency, time and purpose. For example:

The koala slept peacefully [manner] in the fork of the gum tree [place] yesterday [time].

Now that we’ve covered the 4 parts of speech known as content words, let’s look at an example of a word that can function as more than one of these types of words.

Can the same word function as different parts of speech?

Yes it can. The same word can function as different parts of speech in different sentences. Consider the word set in the following sentences:

We played a set of tennis.

In this sentence set is a noun. Note that it has a determiner, a, in front of it – one of the signs to help work out if a word is a noun.

My son set the table for dinner last night.

Here, set is a verb – it’s telling us about an action the subject of the sentence, my son, did last night.

The teacher was set in her ways.

In this sentence set is an adjective, or more correctly part of an adjectival phrase, set in her ways, describing the teacher.

Always consider the role a word is playing in a sentence to work out its part of speech.

Well, that’s it for the content words – nouns, verbs, adjectives and adverbs. My next blog post covers the other 5 parts of speech, known as the grammatical words. For a handy summary of all 9 parts of speech, download my quick grammar guide to parts of speech. And if you need help wrangling or untangling the parts of speech in your sentences, I’d love to be your guide.

If you’d like to delve deeper into grammatical topics like parts of speech, you’ll find more information in the following resources (and many others).

The University of Chicago. (2017). The Chicago manual of style online (17th ed). https://www.chicagomanualofstyle.org/home.html

Hi, I’m Charlotte Cottier from CC Editing Services. I’m an accredited editor with an eye for detail. I read, correct and refine your writing, so you can communicate your message with confidence – and make every word count. Contact me for a free quote on your next project.