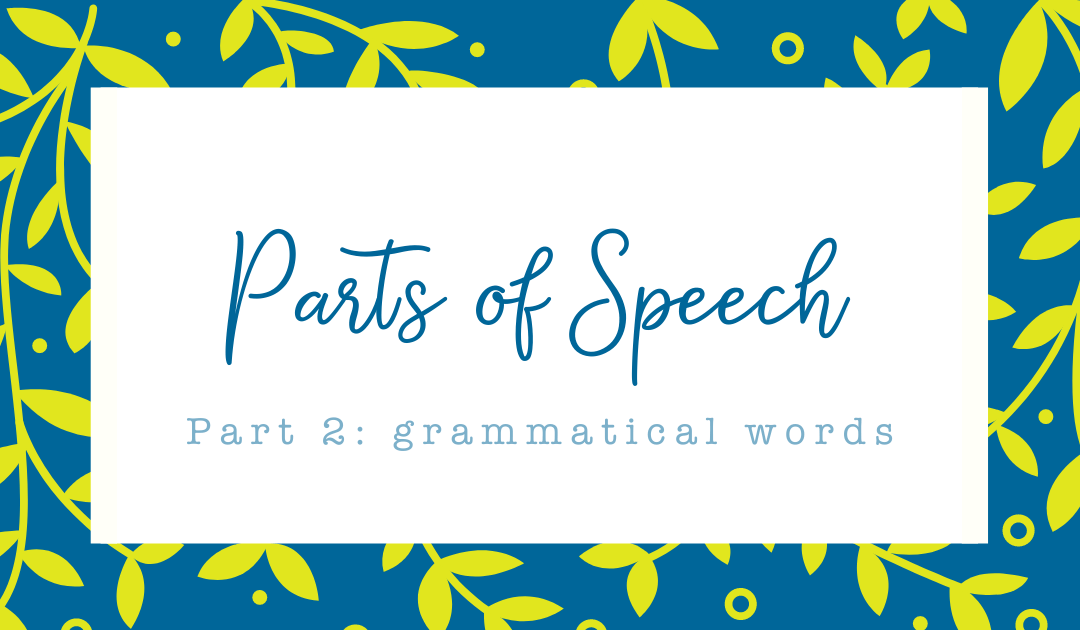 In my previous blog post about parts of speech, I discussed the 4 parts of speech known as lexical or content words: nouns, verbs, adjectives and adverbs. In this post, I’ll cover the other 5 parts of speech, known as grammatical words: pronouns, determiners, conjunctions, prepositions and interjections.

Again, I’ll use the following sentence to illustrate the different parts of speech:

Hey, that cute little koala climbed quickly up her tall tree and munched hungrily on some gum leaves.

Pronouns stand in for nouns or noun phrases already mentioned (or about to be mentioned) in a text. In our sample sentence, her is a pronoun that refers to the koala; in this sentence, it is functioning as a determiner (see below for more on determiners).

Different types of pronouns include:

Personal pronouns can show number (singular or plural), case (subjective, objective, possessive) and person (first, second, third). The pronouns she, he, her, him, hers and his also show gender.

TIP: You can use they, them or their in a singular sense when you need a gender-neutral pronoun or to refer to a person who uses they as their pronoun. For example: The teacher taught maths to their class using hands-on activities.

For more on personal pronouns, see my blog post about when to use me, myself or I.

The determiner word class is a more recent addition to the parts-of-speech family. Previously, most determiners were considered to be a sub-class of adjectives. Determiners always appear with nouns or noun phrases and specify (or determine) which noun or ‘thing’ we are talking about or its quantity.

In our sample sentence, the words functioning as determiners are that, her and some because they specify or quantify the nouns we are talking about in the sentence (that koala, her tree, some gum leaves).

The most common determiners are 3 little words that some grammarians class as a part of speech on their own – the articles a, an and the.

The articles a and an are called indefinite articles, while the is called the definite article. For non-native speakers of English, deciding whether to use an article and which type of article to use can be confusing. A simple rule is that the refers to a specific thing (and often something you have already referred to), while a or an refers to a thing in general.

Whether to use a or an depends on the starting sound of the following word, no matter how it is spelled – including for acronyms. If the word or acronym starts with a vowel sound, use an (e.g. an hour, an MBA), and if it starts with a consonant sound, use a (e.g. a university, a historic occasion).

Besides the 3 articles, many other words can also perform the determiner function in a sentence, including possessive pronouns (e.g. his, her, their), words expressing quantity or extent (e.g. some, all, most) and numbers.

Conjunctions join words, phrases or clauses together in sentences. In our sample sentence, the conjunction and joins the 2 phrases in the sentence that describe the actions of the subject of the sentence, which is the cute little koala: she climbed quickly up her tall tree and munched hungrily on some gum leaves. Conjunctions can be of 3 types: coordinating, subordinating or correlative.

When using coordinating conjunctions to connect independent clauses, they should be preceded by a comma; hence, they are sometimes called the ‘comma FANBOYS’.

Subordinating conjunctions are used to introduce dependent clauses (i.e. clauses that cannot stand alone as sentences). English has many of these conjunctions. A few common examples are although, because, when and if.

Prepositions establish relationships in time, space or abstract worlds of thought, usually with the following word. The English language has more than 100 prepositions. In our sample sentence, up and on are prepositions.

TIP: Prepositional phrases (e.g. across the street, on the way to the station) can add variety to sentence starters in your writing, particularly when writing with a first-person point of view (I and me pronouns).

Hey is the interjection in our sample sentence. These types of words are not grammatically related to any other part of the sentence. They are used to express a strong feeling or sudden emotion, such as surprise, disgust, joy, excitement or enthusiasm (e.g. wow, yuck, hurray, gosh) and often appear at the start of a sentence or even on their own in a one-word sentence with an exclamation mark. Yes!

Why are parts of speech important?

You’ll also be able to diagnose issues more readily when revising your work and perhaps even recognise and circumvent problems as you are writing. You can ‘seek and destroy’ unnecessary adjectives and adverbs, simplify cumbersome noun strings and liven up your sentences with strong verbs. And if you’re working with an editor, you’ll be better placed to communicate effectively with them and understand their feedback.

If you’d like to delve deeper into grammatical topics like parts of speech, you’ll find more information in the following resources (and many others).

The University of Chicago. (2017). The Chicago manual of style online (17th ed). https://www.chicagomanualofstyle.org/home.html

Hi, I’m Charlotte Cottier from CC Editing Services. I’m an accredited editor with an eye for detail. I read, correct and refine your writing, so you can communicate your message with confidence – and make every word count. Contact me for a free quote on your next project.